Other news
When she knows it really is Jesus he says to her the mysterious words – Noli me tangere, ‘do not touch me, for I have not yet ascended to my Father.’ 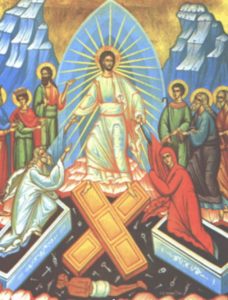 Mary Magdalene was the first person to discover that the tomb of Jesus was empty, according to St. John’s Gospel. After the other disciples had been and looked and gone away, she stayed in the garden of the tomb, and there she met the risen Lord, but she did not recognise him and supposed he was the gardener. When she knows it really is Jesus he says to her the mysterious words – Noli me tangere, ‘do not touch me, for I have not yet ascended to my Father.’

It happens several times in the stories of Jesus’ resurrection appearances that the disciples do not recognise him, even though he is someone they know well. There is something about him that is strange, different, uncanny. Perhaps they are too caught up in the past, their past knowledge of him, and not open to the possibility that he is alive again when they had seen him die. The idea that a dead person could come back to life was quite beyond their normal way of thinking as people brought up in the Jewish faith. And Jesus was not just alive again, but entered upon a whole new dimension of being, going beyond the usual constraints of the physical world.

Some versions of the Scripture interpret the words noli me tangere as ‘do not hold on to me’ or ‘do not cling to me,’ and even present this as if it were a translation. The Greek word used here, however, does mean ‘touch’ and cannot be made to mean hold on to, so the translation is really an interpretation. Nevertheless it does seem to make sense. When someone we know and love dies, we often want to hold on to the person we knew, even pretend that they are still alive, but we have to let go of them if we are to carry on living ourselves and live in the reality of how things truly are. This may be why commentators suggest that Jesus is saying to his friends, Let go of the Jesus you knew: he has died, do not hold on to him, because if you do you cannot be open to the truth that he has gone beyond death into eternal life, and will not be able to know that eternal life for yourselves.

To believe this is a tremendous challenge to the disciples and to us as their successors in the Church. Change is always difficult for us as human beings. We prefer the comfort and reassurance of the familiar, even when, perhaps especially when, it is not very satisfactory. Launching out into a new way of thinking and being which will transform us in a way that is yet unknown can be a fearful prospect. This may be why John Main said that it sometimes seems as if we are more afraid of resurrection than we are of dying.

On the evening of the first Easter day Jesus comes to the disciples – he is just there, inside the locked room – and pronounces his threefold benediction, ‘Peace be with you.’ Thomas, the one we call Doubting Thomas, is not there and when he is told about the appearance says he will only believe the evidence of his own senses. The following Sunday Thomas is with the others when Jesus comes to them and once more gives them his peace. This time (nothing if not inconsistent!) he tells Thomas that he should touch him and so know it is truly Jesus there with him. I like to think that by this point Thomas does not need to touch the body of Jesus (the Gospel does not say that he did): he is already sure and so is able to make his famous statement of faith – on behalf of all of us – ‘My Lord and my God!’

Many people have suggested over the last year or so how hard it is to be deprived of the power of touch. Not to be able to reach out and touch and embrace those we love, especially when they are suffering or in distress or dying, is a real deprivation: it is such a natural human gesture. But of course there are many things we have had to do without during this time of pandemic, which makes it seem like an empty negative episode: we only long for it to end. If, however, we can learn to let go gracefully of the things we cannot have, this can be good training for that ultimate moment of letting go of everything we are and everything we have when we hope we will return with Christ to the Father: ‘Lose your life in order to find it,’ as he said.

Since we are persons with a physical body, not disembodied souls, external forms are important to us, the means by which we can know spiritual realities. You can watch a Mass online, but not to be able to receive the sacrament does not give us its full and proper meaning. And yet ultimately in the life to come there will be no sacraments, or rather everything will be Sacrament.

Meantime where we are now, however we feel about it, is always filled with the presence of God, and so is always the time of blessing. We may not be able to see Christ as Thomas and the others did, but as he says to us, ‘Blessed are those who have not seen and yet have come to believe.’

During this time of Eastertide we can walk with the risen Christ and experience the overwhelming, unimaginable delight of his first disciples – and we have a whole season of fifty days to savour it, indeed the whole of our lives here and hereafter.

So on this Easter day of the pandemic I wish you every blessing and all the joy of the risen Lord,

“Touching the Wound” is a Mass to acknowledge the sense of hurt felt by those affected by sexual abuse of minors – the abused, abusers and bystanders.

He will wipe away every tear

He paid close attention to the people whom He encountered day in and day out: healing, showing compassion, caring, forgiving and loving. No strings attached.